Autumn is also the time to harvest grapes, so writing a few sentences about foods dogs should never eat is okay because grapes come first. For humans, it is a time of socializing and working in the vineyards, but for our pets, the harvest is dangerous, as the grapes can be poisonous.

Grapes are not poisonous to every dog, but signs of disease develop quickly in a dog that is sensitive to grapes, and poisoning can be very dangerous. 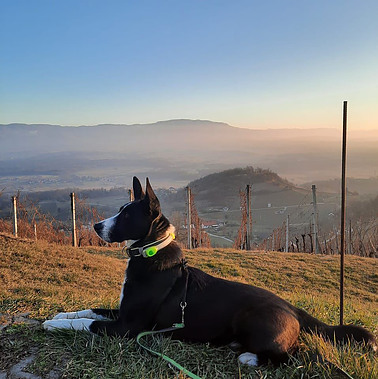 The Signs of Disease

The signs of disease caused by excessive consumption of grapes or raisins are vomiting, diarrhea, the dog does not want to eat, abdominal pain, and tiredness. Sudden kidney failure also occurs. In addition, due to irreversible kidney damage, urine production may be reduced or even completely stopped.

Unfortunately, it is not yet known which substance in raisins and grapes causes kidney failure in dogs. We also cannot yet determine which dog can be poisoned by grapes or raisins and which cannot. However, it has already been confirmed that the toxicity increases proportion to the number of grapes or raisins consumed. This means that the more grapes or raisins a dog eats, the more toxic it can be to him. A dose that can be toxic for a dog is 2.8 g of raisins or more or 19.6 g of grapes per kilogram of dog body weight. Nevertheless, there are cases when dogs ate up to a kilogram of raisins but did not show any signs of illness.

When we suspect grape or raisin poisoning, we must take the dog to the vet as soon as possible. Treatment is effective if the vet empties his stomach and intestines by inducing vomiting within just a few hours of ingestion and gives him medicated charcoal. The veterinarian continues the treatment with aggressive fluid therapy that lasts up to 72 hours after ingestion, which supports kidney function. Dogs with impaired coordination of muscle movements are weak, and their urine production is reduced or even stopped completely; aggressive dialysis therapy needs to be prolonged, and the possibility of their recovery is poor.

Don’t Let Your Dog Into the Vineyard

Dog owners can prevent poisoning by denying access to packaging bags with raisins. We must pay attention to the number of grapes that the dog eats. The dog should not roam freely in the vineyard during the harvest and when the grapes have ripened. We must be especially careful if the dog already has a known kidney disease. We must also pay attention when we notice vomiting, diarrhea, low blood pressure, or dehydration in the dog. It is hazardous if the dog has been in contact with antifreeze, sprays for plant control, chemicals that are often used in the household, insecticides, fungicides, or other poisons that affect kidney function, as a dose of grapes and raisins, which can be toxic to dogs, are significantly reduced.

In any case, grapes are not the only “forbidden” food.

Some Other Foods Dogs Should Never Eat

As they contain various organosulphoxides, especially alkenyl cysteine ​​sulphoxides, which in dogs cause damage to erythrocytes (red blood cells) and lead to anemia. The toxic dose of onion is 50g of onion per kilogram of body weight. Signs that appear are vomiting, diarrhea, weakness, accelerated heart rate, breathing, and pale-yellow mucous membranes,…

Coffee and Other Caffeinated Preparations

Affect the nervous system in dogs, causing restlessness, vomiting, and palpitations. Due to the content of theine, it is also necessary to avoid tea.

An artificial sweetener found in, e.g., chewing gum and toothpaste, causes the release of large amounts of insulin in the body and, thus, hypoglycemia. The first signs appear quickly, maybe within 10 minutes after ingestion, and are apathy, vomiting, and coordination disorders; if not treated, they can lead to convulsions, coma, and death. Kidney failure can also follow within a few days. As first aid to a conscious dog, you can give sweetened water, glucose, or honey.

Contain theobromine; the darker the chocolate, the more it contains. Symptoms that occur after ingestion are vomiting, restlessness, tremors, epileptic seizures, palpitations, and respiratory problems that may follow and may end with heart failure and death. The critical dose for a dog is 100 mg of theobromine per kilogram of body weight, which is approximately 50-60 g of milk chocolate or 5-8 g of dark chocolate per kilogram of body weight.

Stone fruits, such as apples, cherries, and peaches, contain amygdalin in their pits, a substance that releases hydrogen cyanide in the bloodstream. Neurological disorders, convulsions, vomiting, diarrhea, respiratory problems, and shock may develop. Various pits can also cause gastrointestinal obstructions.

Avocado contains persin, which is a naturally occurring fungicide. Eating avocado can lead to vomiting, diarrhea, and even more severe respiratory problems. The leaves, bark, and avocado peel contain more parsley. Opinions on the consumption of avocados are very divided, but it is better to avoid the risk. The pit can also obstruct the gastrointestinal tract.

Human medicines are not considered food, but it is definitely worth noting that you should not give humane medicines to dogs yourself. Hairy people often end up in the clinic due to poisoning with ibuprofen, acetylsalicylic acid, and paracetamol. Certain substances lead to severe poisoning, drooling, apathy, gastrointestinal problems may occur, stomach ulcers, bleeding in the gastrointestinal tract, and often organ failure (liver, kidney) and death may occur.

Above are some toxic or potentially toxic food substances for our furry friends, but the list is much longer; it also includes vegetation, e.g., oleander, lilies, ficus,… and other toxic substances such as ethylene glycol, which is found in antifreeze, organophosphorus compounds and carbamates, which are in rodent and snail poison, and more. In case of suspicion of ingestion of toxic substances, immediately call the veterinarian, and consult; even if you do not notice any clinical signs yet, some consequences can be quick, some appear after a few days, and quite often, the damage is irreversible and can be fatal.

Offer your four-legged friend what is suitable for him. In today’s diverse range of substances suitable for them, there is no need to take any risk in such cases. However, you can offer certain things to your canine friends under certain conditions, e.g., remove the pawns from the watermelon or offer him a banana.

Let the autumn be just right to warm and full of happy paws. This book is a must-have for every canine lover.

Promise You Will Keep Me Safe? : Dictionary of dangerous and safe food for dogs, including people food, plants and herbs