Garlic is an aromatic and unpretentious bulb. Growing garlic outdoors occurs by planting pods, which are obtained from mature heads, in which a more significant number of pods exist. Once we grow enough heads and store them properly, buying garlic to plant in the garden is no longer necessary. Garlic is divided into two subspecies: Allium sativum ssp. ophioscorodon and Allium sativum ssp. sativum. Their difference is that the former forms flower stems (it has a “hard stem”), while the latter does not (it has a “soft stem”).

Any garlic is autumn when planted in the fall or spring when planted in the spring. The time of planting does not affect the appearance of flower stalks. The belief that garlic grows only in “poor” soil is not valid, as it forms beautiful heads and is stored for a long time even when grown in universally fertile soil covered with compost mulch.

Growing Garlic Outdoors-How and When to Sow 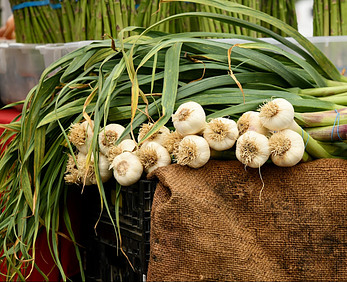 Garlic is grown from individual pods, which are obtained from ripened heads of garlic. We choose beautiful and large outer cloves of garlic. The bigger the pod we plant, the bigger the garlic will be.

Fall garlic is planted in late October or early November. Spring garlic is planted in February or, at the latest, in early March, when the ground is no longer frozen. In both cases, we plant in the same way. On the bed, first, mark the rows that are 20 cm apart. Pods are planted in individual rows at a distance of 15 cm. The fastest way to do this is with the help of garden tape measures, which we stretch for each row separately and push the pods into the ground at multiples of the number (distance) of 15. We push them about 3 to 5 cm deep (a few cm deeper into the compost mulch).

We immediately cover the garden canopy directly over the bed in the spring. Not so much for a better microclimate but to protect it from garlic and onion flies. When garlic is planted in the fall, the bed (even without the onions) is covered in early February.

It doesn’t need special care, and it doesn’t need to be watered much either since most of its growth occurs in autumn or spring, when there is enough moisture in the soil. Autumn garlic is even better developed, as it already develops a strong root system by the beginning of winter.

During the growth of young plants in early spring, the plant cover is loosened several times so that it does not inhibit plant growth. We remove the weight from the plant cover, lift it, put it back slightly, and weigh it down. When the garlic leaves are 10 cm high, we set up the garden arches, stretching the plant cover to give the garlic room to grow. If the leaves have been a little curled up until now, they will straighten out soon. In May, the cover is replaced with an insect net, which is covered for at least another month.

Weeds between the rows are removed with garden tools, and some individual weeds near the plants are removed by hand. In May, we cover the garlic with a summer mulch made of grass clippings, leaves, or straw.

What to Do With Flower Stalk

Garlic varieties that develop a flower stalk will begin to develop them in late May or early June. We remove them as soon as we notice them. Otherwise, the garlic will not thicken the head in the ground. The flower stem is cut or broken off at the point where it emerges from the leaves. Young, unopened garlic flowers are a real culinary treat and do not belong in the compost pile.

Sometimes we can let the garlic bloom and thus create a new generation of garlic. A flower stem is not actually an actual flower stem, as it does not bear flowers but a cluster of tiny aerial bulbs. This is how garlic reproduces itself vegetatively. When the bulbs are easily separated, they are picked, dried for a few days, and stored. We plant them at the same time as the classical cultivation of autumn or spring garlic. In two years, we will have nice thick cloves of garlic.

Challenges and inconveniences of growing garlic

The garlic fly is dangerous to both garlic and onions. Unlike the onion fly, only one larva is found in a single plant when attacked by the garlic fly. It causes damage in April and May (maybe even earlier) when the fly lays its eggs on young plants or the ground near the plant stem. The damage caused by eating is noticeable later; when the attacked leaves start to curl and grow outwards, the plants lag behind in growth, turn yellow, the stems soften, and the pods rot and are much smaller than in healthy plants. The adult larvae then move into the head of garlic, leaving the plant and burrowing it into the soil in mid-May. We notice this (when it is already too late) when the leaves of the plant are curled and do not grow well in height.

The onion fly can also attack garlic, or the leek borer can create holes and cracks. It is best to protect the plants by covering them with netting or insect netting from February to May.

The red lily beetle lays its eggs on its leaves. The larvae feed on the leaves. We reduce the attack by covering, but they can also be removed by hand (using a glove) because the eggs are bright red and can be quickly spotted on green leaves. Rust may appear on the leaves, but the crop usually has no serious problems.

The early harvest is unripe heads or young garlic, which is harvested from the beginning of June onwards. Ripe garlic is harvested when the first leaves turn yellow. This is a sign that the pod is developing into individual units. To ensure uniform ripening, all plants should be laid with their leaves on the ground for at least 10 days before harvesting. Autumn garlic is harvested from the bed at the end of June or the beginning of July, and spring garlic about a month later. We pull it out of the ground and dry it in the sun together with the leaves. When the leaves are completely dried in the sun, it is suitable for storage. Since we want to achieve long storage, we harvest it on the day after the root according to the gardening calendar.

How to Store Garlic

We store garlic until we grow a new one or until we use it up. It can be braided, placed in boxes or mesh bags, and put in a dry and cool place. Best in a room that is not too humid. Let’s make sure that all pods are in dry air.