In this blog, we will answer the questions about the history of wine grapes:

– What is the difference between Vitis vinifera and Vitis Silvestri?
– On which continent the oldest traces of the vine are discovered?
– In the age of which civilizations were the vast majority of vineyards spread throughout Europe?
– Which social strata have further contributed to the development of winemaking in Europe since the Middle Ages?
– When and to what degree did Viteus vitifoliae impact European vineyards, and how did we overcome the permanent risk of it

The History of Wine Grapes Is More Than Impressive

The story of the wine is streaked by old civilizations and tells about the permanent role of wine in developing customs, art, and culture. It reflects a great deal of intelligence from utterances, poems, depictions, etc. By age, this favorite drink is in third place after water and milk, probably also regarding humanity. The Old Testament’s letter says that after the universal flood of Noah, he began to cultivate the earth and plant a vineyard. That’s how it is written in the legend. Otherwise, the wine belongs to the first human success and has occupied a privileged place in many civilizations. A type of epochal discovery in biochemistry is related to wine, for example, fermentation, oxidation, etc. With the expansion of ancient Greek culture, beginning in 1600 BC, vineyards were all over the Mediterranean. The main centers were Mycenae and Sparta. Numerous depictions on the found vases testify that wine was a cult drink for religious rituals, the worship of gods, and celebrations. Six hundred years before Christ, they planted a vine in today’s Marseille, and 100 years later in Sicily.

The vine’s recent history is characterized by two severe parasites, downy mildew (fungal disease) and Phylloxera(insect). Both are brought with seedlings from America. In any case, the vine’s primary mission for humanity’s existence is its economic significance because, in addition to the olive tree, it is the only agricultural crop that produces high value on modest, poorly fertile soil.

History of Wine Grapes From the Very Beginning

Wild grapes, like grapes that we know today, probably existed before the appearance of man on earth. Fossil grapes, about 60 million years old, testified to this. The vine spread across the tropical forest that covered the planet’s hot surfaces. As she searched for light, she developed a tendril that helped her climb the tree. It was named Vitis Silvestris. It seems that its prevalence on the planet was significantly greater than today. It retired to warmer places in the ice age, around the Mediterranean Sea and the Middle East. As soon as the earth warmed up a few degrees, it spread to the north. In contrast to today’s noble vine, the wild vine was exclusively male and female. It had spread with the help of wind, which extended the pollen (pollen) or insects, birds, and mammals fed with grape strawberries.

In today’s Georgia, the earliest traces of vines are discovered, which, in the form of grapes, decorate wine jugs and testify to the art of wine production (the age of about 6,000 years before Christ).

In North America, where Vitis was similarly widespread, there is no evidence that they enjoyed wine before Christianity’s arrival.

The Occurrence of Vitis Vinifera

Generation Vitis comprises many types of vines. It is believed that Vitis vinifera is the most important species grown in Europe and the rest of the world. All the noble vine varieties fall into its frame.
Some others can be used for grape juice (Vitis labrusca) in America and Vitis Coignetiae in Asia. But the taste of the must and wine of the named ones is not as appreciated as the Vitis vinifera.
The finished varieties originate from the hybridization of V. vinifera by species Vitis: V. Berlandierei, V. Labrusca, V. Riparia, V. Rupestris. These latter are used as the basis for grafting the noble vine because they are resistant to phylloxera.

Without a doubt, the wine was discovered by chance. The people of Asia Minor kept grape juice in clay and sheepskins, and camel skins. Heated juice began to ferment shortly. Nobody knows if the juice has completely fermented, whether it has turned into vinegar or has remained partially sweet. But the grapes had to be very sweet because the beverage after the fermentation causes drunkenness. Only later, did the botanists name the European and near-eastern vines Vitis vinifera: a vine capable of producing wine.

History of Wine Grapes in Greece 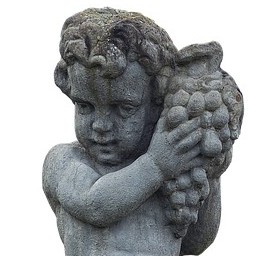 With the expansion of the Ancient Greek Civilization, about 1600 years before Christ, people spread the vine throughout the Mediterranean. The main wine-growing centers were in Mikena and Sparta. This is evidenced by the discoveries of many decorated wine bowls and vases. The wine became a cult drink dedicated to the worship of gods and celebrating holidays and victories.

Methods of wine production were already well-structured, but, as a rule, seawater was added to the young wine during alcoholic fermentation to make the wine softer. Greek settlers spread vines over Syria, Egypt, Marseille (600 years BC), and Sicily (500 years BC). Ancient Greek civilization also developed a wine culture, and it was played by the god of wine, Dionysos, an important role.

After fading the glorious ancient Greek period, the vineyard culture spread further along with the Roman Empire. Wine became a social status, a commodity for exchange, medicine, and a divine drink. They enjoyed it, especially at parties. The vine’s white wine was best known, which was planted along the walls north of Naples. Pliny wrote that wine was dry or sweet but always alcoholic.

They also experimented with various forms of the vine and separated the varieties. According to Virgil, there were already as many varieties as pebbles on the shore. The Romans spread the vine from the south of France to the German Rhine. On the territory of today’s France and Spain, some tribes have been planting vines already before the Romans’ arrival.

In the first centuries of our era, grapevines spread widely across Europe. In the Middle Ages, monks were most responsible for the development. But Cistercians were most active in the vines and wines development after the Benedictines.

In the Renaissance period, promoters of viticulture were, above all, monarchs, and the wealthy bourgeoisie. The vine spread most widely throughout Europe in the 16th century. At the time, vineyards were almost four times as high as today. This golden age ended with wars, epidemics, and the planet’s cooling. Therefore, the vines withdrew back into the earth’s globe’s warmer parts to today’s vineyards territories.

The vine’s recent history is characterized by two severe parasites, downy mildew (fungal disease) and phylloxera (louse or aphid). Both are brought with seedlings from America. Since 1863, the phylloxera has spread to all vineyards of Europe and has destroyed them for decades. Around 1910, medicine was found for phylloxera in the form of grafting of the European vine to a resistant American vine. At that time, the number of previously cultivated vine varieties also decreased.

The fact that our civilization defeated such a terrible Apocalypse as the phylloxera and preserved vines confirms its versatile meaning for people’s lives on earth. In any case, the vine’s primary mission for humanity’s existence is its economic significance because, in addition to the olive tree, it is the only agricultural crop that produces high value on modest, poorly fertile soil. The social aspect also has a lot of weight. The wine mission complements the food, like spices, but wine is food for the soul. We can not feel any other food or drinks with our senses like we can sense the wine. All civilizations tried to immortalize the vine’s role in art in their way. Even today, with the spread of wine culture, healthy and moderate consumption of wine consolidates its importance in people’s everyday lives.

Summary of History of Wine Grapes

According to the rich history of the vine and wine, the question is whether any other agricultural culture is more important to the human race. In addition to its economic role, it also contributed to vast civilizations’ identity. Even today, the wine is the family’s pride, the country’s pride, the state, and the people. In the Slovenian anthem, which is a world unicum, we prove as our people our respect and love for this sacred plant and noble drink.

This entertaining and fascinating book looks at 100 bottles that mark a significant change in the evolution of wine and winemaking and captures the discoveries and innovations that have had the most significant impact on the history of ‘bottled poetry.’

The History of Wine in 100 Bottles: From Bacchus to Bordeaux and Beyond