Plant Cauliflower Plants in the Garden or Greenhouse

Growing a snow-white head of cauliflower is a real challenge and pleasure in the garden. So try to plant cauliflower plants in the garden or greenhouse. It is more demanding to grow than other cabbages, as it requires fertile soil, which can be achieved with compost mulch. At the same time, he prefers spring and autumn time to the heat of summer. Therefore, growing in early spring and late autumn is much more successful.

A cauliflower floret is more or less a solid mass of thickened flower stems rather than an actual flower. Many mistakenly classify it as a flowering plant according to the biodynamic classification, but it is a leafy plant. Some varieties are also purple. Because of its green color and its fractals, it is a very special Romanesco cauliflower that can withstand lower temperatures.

In the book “Cauliflower Power: Vegetarian and Vegan Recipes to Nourish and Satisfy,” we can find 60 recipes that show off the myriad ways cauliflower can be enjoyed.

Cauliflower is usually grown twice a year, and the sowing is not repeated. We start spring sowing to prepare seedlings in the middle or end of February. Sowing for the autumn crop is carried out in May or, at the latest, at the beginning of June.

The procedure is the same as for broccoli, except that with cauliflower, according to the gardening calendar, we do everything on leaf day. This mainly simplifies our work when raising seedlings, as the care takes place in parallel. We also sow cauliflower for the third time growing in the greenhouse, into which we transplant the seedlings in August and have a harvest in November and December. Romanesco cauliflower, which can withstand lower temperatures than ordinary cauliflower, is the most suitable for a late crop from the greenhouse.

When and How to Plant Cauliflower Plants 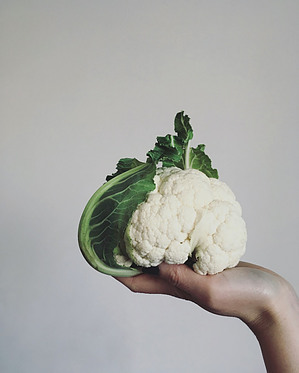 We choose varieties with a shorter growing season to grow early cauliflower, which usually also produces smaller heads. To have early cauliflower seedlings ready at the beginning of April, sowing is done about 45 days earlier. In February and early March, the conditions outside are not yet suitable, so we grow seedlings indoors or in heated rooms with enough light.

First, we sow several seeds in a larger plant pot, where the seeds germinate. We sow in the humid substrate and sprinkle the seeds with a dried substrate 0.5 cm thick. We germinate at a temperature between 18 and 22 °C, which also suits other plants that are germinated at the same time. Since they successfully sprout in the dark, we cover the plant pot, which enables better germination in constant humidity. We uncover immediately when we notice the first sprout, which can be as early as two days, and we straight away move it to a bright location. When the “heart-shaped” cotyledons are well developed (within 7 to 10 days behind sowing), we transplant the plants into separate medium planting units with a quality substrate mixture. We don’t wait that long for the real leaves to start developing because the roots, which we would damage during picking, are also growing at the same time. We carry out natural selection by picking because we choose good plants. If the plants have “stretched” up to now, we plant them deeper when picking, right up to the cotyledons. We do not touch the roots of the plants but help ourselves with a wooden or plastic stick.

Place the Plants in a Bright Place

The plants are then placed in a bright place with a temperature between 18 and 22 °C, which suits most plants grown from seedlings. Night temperatures can also be lower, down to 4 °C. If we have more plants left after picking, we eat them as microgreens, as they are edible at this growth stage. We water the seedlings regularly every other day, just like all the other seedlings we grow simultaneously.

Before the seedlings are transplanted to the beam, they are hardened for at least 4 days against a southern wall or a greenhouse to adapt to the outside temperatures, especially to the fluctuation of night temperatures.

Time to Transplant Seedlings of Cauliflower Outdoors and Planting Distance

The first seedlings are transplanted outdoors when they have between 3 and 5 true leaves or about 45 days after sowing. For the first sowings, this means the end of March, the beginning or the middle of April. The seedlings are planted at a distance of 50 cm in a zigzag pattern. If we plant more densely together, the yields will be smaller. These very early sowings must be covered with tarpaulin, preferably over arches, as the tarp must not squeeze the seedling. We plant deep, up to the first leaves, so that the plant does not fall over under the weight of the heads. We can also plant in a higher pile. Only lightly water the planting hole, as the soil is usually moist enough in the spring. In case of dry weather, water the entire surface of the tree abundantly.

In May, we still protect the plants with garden cover, which perfectly protects the young plants from the cold wind, cold nights, and flying pests. Then we replace the plant cover with an insect net, which is on the bed until the last spring crop is harvested.

For the autumn harvest, seeds for raising seedlings are sown in early May. These are varieties with a longer growing season that better withstand hot summer days.

Growing seedlings in May is much easier because everything can be done outside next to the garden shed or greenhouse due to the higher temperatures. Like in February, the seeds are first sown in a larger container and later planted in a medium planting unit. Since the plant is always outside, hardening, as with early seedlings, is unnecessary. We have to pay more attention to watering in May and June, as the sun dries the substrate quickly. At this time, the white cabbage butterfly (Pieris brassicae) is already active and can lay yellowish eggs on the underside of the seedling leaves, from which caterpillars develop, which can destroy the seedling in just one day. Therefore, it is recommended to cover it with an insect net or a net with such holes to prevent access by butterflies.

The seedlings are transplanted to the bed in June or at the beginning of July when they have between 3 and 5 true leaves or about 30 days. Seedlings grow faster at this time than in spring. Plant the seedlings at a distance of 50 cm. We plant deep, up to the first leaves, so that the plant does not fall over under the weight of the heads. We can also plant in a heap. Water the planting hole and even the shaft heavily, as it must also be soaked to the depth. We always behave according to the weather. If we transplant just before the rains, the seedlings will take root ideally. Cover immediately with any summer mulch. Like other brassicas, it is best to protect them from flying pests in the summer with an insect net immediately after transplanting.

Early cauliflower can be replaced on the bed at the end of June by winter leeks (seedlings) and carrots (sowing). The autumn crop is larger and takes up more space then, so there is less possibility of combinations on one shaft.

The transplanted seedlings are watered daily for the first week, especially in dry and sunny weather. Then gradually, as little as possible, allow the plant to take deep root. We water at most once a week. Summer mulch (grass clippings and straw) is suitable for flowering plants from mid-May onwards. If we did not plant the seedling deep enough and it later starts to droop, cover the stem with soil or mulch to make it more stable.

Sunlight turns exposed white cauliflower yellow, so we do not remove its leaves; shade the head with it by tying the leaves above the flower stem with a string.

We protect any cauliflower from mid-May to the end of October with an insect net. If it is grown in a greenhouse, the side ventilation openings are also covered with an insect net to prevent the entry of any flying pests.

In a way, the nets still spoil the image of our garden. If we don’t have or don’t want an insect net, prepare a piece of cardboard (cabbage fly) for each seedling and stick some colorful butterflies (cabbage white) next to it.

Young seedlings (stalks) like to be gnawed by weevils or attacked by ants that feed on the sweet plant sap that flows over the plant. The leaves of young plants can be attacked by flea beetles, which can be recognized by the small holes in the leaves. These appear mainly after transplanting when they are still under “stress.” Later, the white cabbage caterpillar feeds on the leaves and damages cauliflower the most. The best prevention in the spring is to cover the entire bed with a canopy and on hot days with an insect net. An interesting protection against cabbage whiteflies is also artificial colored butterflies stuck on a bed, which repel cabbage whiteflies. It is very timid and does not enter the territory of other butterflies. One artificial butterfly per three seedlings should be sufficient.

The biggest challenge is the cabbage fly (Delia radicum brassicae), and the best protection is cardboard around the plant’s stem, which is made according to the procedure described for broccoli.

Cauliflower plants usually form a crop with delays and not at the same time, which allows us to harvest it gradually and use it continuously. The first early cauliflowers are harvested in the second half of May, June, and July. The autumn ones are harvested before the autumn frost, in September, October, and the beginning of November. It does not hibernate outdoors during the winter, as temperatures below -3 °C destroy it. We harvest white, firm, developed cauliflowers. Cut between the flower stem and the leaves with a sharp knife when harvesting the crop for immediate fresh use. We do not eat the leaves, as they are thicker and less tasty than broccoli leaves.

The stems and older leaves that remain after the harvested crops are composted. The stem is best crushed in an electric branch chipper or lawnmower.

THE TRICK FOR AN ABUNDANT HARVEST
Snow-white cauliflower heads are obtained by surrounding and covering the young head with its leaves. We tie the leaves at the top and thus shade the still-developing head. The head will turn yellow and harden slightly when exposed to intense sunlight.

Cauliflower is used immediately; if left too long, the flower stem will deform, bloom and turn yellow. Harvested cauliflower waits in a cold place for a few days. In the case of longer storage for the winter, it is best stored by cutting it fresh into smaller parts and freezing it.