How to Grow Cucumber Plants in a Garden or Greenhous

Usually, we grow cucumber plants in a garden. We also grow them in greenhouses, but always at the height of the support to save space. Since the cucumber is pollinated with insects, the greenhouse must have enough openings. It also thrives outdoors on height support or directly on the ground without any problems. The fruit contains a lot of water and hydrates our body wonderfully in the summer. Roughly speaking, cucumbers can be divided into salad varieties and smaller delicatessen cucumbers that are suitable for pickling.

Cucumbers are generally sown once a year, although due to the shorter growing season, sowing can also be repeated later in the season. In the case of cultivation simultaneously in the greenhouse and outdoors, sow in two successive sowings. We will focus on more frequent outdoor education. Cucumbers can also be planted directly on the bed, but it makes much more sense to grow seedlings and transplant them to a specific place where directly sown seeds might not germinate. We grow seedlings in the same way and at the same time as we grow zucchini and pumpkin seedlings.

Grow Cucumber Plants – When and How to Sow 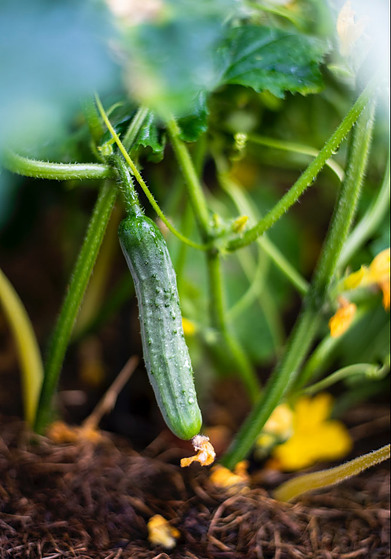 We grow the seedlings in the greenhouse or an external protecting area (where we harden the other seedlings) with enough natural light. Cultivating cucumber seedlings follows the hardening off schedule of tomato, pepper, pepperoni, and eggplant seedlings. As seedlings, they should grow in an environment between 18 and 22 °C. Night temperatures can also be lower, up to 4 °C, which young cucumbers can still successfully withstand. Move them to a warm place at lower temperatures or reheat them overnight for growing in a greenhouse, where we grow them for an earlier harvest. Sow, and transplant them 20 days earlier. Therefore, since the seeds are sown at the beginning of April, they must be grown in indoor (heated) rooms.

Sow one seed 2 cm deep in individual medium planting units with the moist substrate at the end of April. We don’t transplant cucumbers. If we grow them in medium-sized plastic containers, we only fill them halfway with the substrate when sowing. As the seedling grows, the substrate is gradually added until it is filled to the top. In this manner, we strengthen cucumber because seedlings often have long stems.

Since they germinate successfully in the dark, we cover the planting units, which enables better germination due to constant humidity. We uncover as soon as we see the first sprout, which can be as early as three days, and we immediately move it to a bright place. When the cotyledons open, it is time to transplant them into a large planting unit, that is, within 7 to 10 days of sowing. If the plants have “stretched” up to now, we plant them deeper when transplanting, right up to the cotyledons. Cucumber grows very quickly, so the seeds can also be sown in a large planting unit (skip the middle one). We water the seedlings regularly every other day, just like all the other seedlings we grow simultaneously.

Cucumbers can also be planted later or in intervals, but this does not make sense, as most of the first plants produce until September.

When to Transplant and Planting Distance

Seedlings are ready for transplanting 20 to 25 days after sowing. Transplanting the seedlings into the greenhouse takes place about 20 days earlier, at the end of April or the beginning of May. We transplant them outdoors in mid-May. The planting distance depends mainly on the method of cultivation.

If we propagate them on the ground, one plant needs a space of 1 m2, so we plant them in one row on the shaft, with a distance of 100 cm in the same row. This is more suitable for varieties of (a delicatessen) cucumbers that are used for pickling and are more often grown in the field. For better yield and clean fruits, salad cucumbers are grown vertically. Since salad cucumbers are common in gardens, we will focus on growing them along with support. On a bed 100 cm wide, the last possibility of planting is to plant them in two rows and, for each row, separately place support made of plastic nets for cucumbers (or peas).

They grow well in a bed covered with compost. If cucumbers are grown in bare soil, the least we can do is add compost to each seedling separately in the planting hole. We also do not transplant deeper into the soil because the soil can dry out and damage the cucumber stem. Water the planting pit (or even the entire flower bed) and transplant an individual seedling into it. Since the soil is already warmed up in mid-May, we can already think about summer mulch when transplanting the seedlings. Fresh grass clippings, leaves, or straw work best. We place the support immediately or later, in the middle of June at the latest.

Before the cucumbers, we grow spinach or spring lettuce. Seedlings are also transplanted between growing spinach or lettuce. Cucumbers and dill complement each other on the plate, which is why we plant them together in the garden. It grows independently on the shaft, creeps or climbs, and creates a dense shade, so it is usually not combined with other vegetables. After the cucumbers in August and September, transplant autumn lettuce, late radicchio, endive, Chinese cabbage, sow spinach, or chard.

We water at least every other day until they take root well and begin to crawl or climb up. Then we maintain regular watering, as this will affect the taste of the fruit. When cucumbers are not watered enough, they become bitter. The same thing happens if we overwater them. So, with proper watering, we reduce fluctuations, which are also mitigated by covering the ground.

The support is a plastic net for cucumbers (or peas) that they have in stock in agricultural stores. It also needs a frame on which to mount it. It is recommended that it be between 1.5 and 2 m high. In the greenhouse, the net is attached to the existing framework of the greenhouse. But there is another possibility of support, namely along the string (as with tomatoes and eggplants), which is significantly related to the special care of cucumbers.

In the same way that we can remove the cotyledons from tomatoes, we can also remove them from cucumbers, which create new shoots “behind the leaves.” The leaflets develop into new stems, which is why we maintain a single top. When removing, we need to be 100% sure that we have pinched off the right leaf shoot. If unsure, we prefer to wait a few days for it to grow and identify it better. We recognize the leaf shoot when it is about 5 cm long, then pinch it off. We can also remove more extended leaf shoots if they accidentally “escape.”

Cucumbers are known for their luxuriant growth in June and July, after which a huge crop cannot be used at all. Due to the lush growth, the plant is also exhausted at this time, so the leaves soon begin to dry, and the plant collapses. Removing the leaflets means the cucumber does not experience excessive growth; the crop is more uniform and available for extended periods.

Please grow cucumbers on one stem, which means that we remove all the leaflets that appear every 7 to 10 days (same as for tomatoes and eggplants). Many times one escapes, and then the cucumber makes several stems. We leave a maximum of 4 peaks along the vertical grid, but we must strictly maintain one peak along the string. Cucumbers cling to the net with tendrils, and we have to twist them around the string by hand.

Leaves and stems can be attacked by aphids, which are best controlled by regular watering. A drying and varying size of cucumbers also indicate uneven watering.

With the proper watering, they will never be bitter but juicy and refreshing. During the season, the leaves can be attacked by powdery mildew, especially when there is a wetter summer rainfall. But mold is not destructive to cucumbers.

How to Harvest Cucumbers

At the beginning of June, we start picking cucumbers in greenhouses. We harvest them outdoors from the end of June until October. Salad cucumbers are harvested when they are over 20 cm in size. Pick small 5 cm cucumbers for dipping in vinegar. When picking, use a knife to help cut the plant cleanly and not injure the plant by forcefully tearing the fruit. It is recommended to harvest daily for the fruit or conditionally for the flower since, during harvesting, we are in regular contact with the plant, which encourages it to develop new fruits and flowers.

Delicacy cucumbers are harvested as small as possible, up to a maximum size of 10 cm. Because of this, we must be in the garden every second or third day during the season’s peak and put them in jars on the fly. This is also why we plant more deli cucumbers, as we can store the crop after each harvest.

The fruits are picked (physiologically) unripe when the seeds have not yet developed. If the fruit stops growing, it has reached its maximum size and is starting to ripen, which can be recognized by its increasingly vivid yellow color. We remove such fruits as soon as possible since we only ripen the fruits to store the seeds. In September, the rate of growth and fruit formation slows down.

How to Store Cucumbers

The genuine freshness of cucumbers can only be tasted from fresh fruits, so they are usually not stored for a very long time. They wait a week or so in a cool place (in the cellar or the refrigerator). We put small deli pickles in vinegar and store them for the winter; they are an accurate synonym for a winter delicacy. Larger salad cucumbers can also be pickled in the same way.