How to Grow Zucchini Plants in Your Garden

Zucchini is a garden classic because it is the tastiest fresh, which cannot be replaced with a purchased zucchini. But how to grow zucchini plants? It happens quickly that we have too many zucchini in the middle of summer. We plant them in gardens sparingly, as a single plant rewards us with abundant produce in the summer. One sowing is enough, as it thrives outdoors until September. We grow it in a greenhouse only if we want a harvest about a month earlier. Since insects pollinate it, the greenhouse must have enough openings.

As a rule, zucchini are sown once a year, although sowing can also be repeated. In the case of cultivation simultaneously in the greenhouse and outdoors, sow in two successive sowings. We will focus on more frequent outdoor growing. Zucchini can also be sown directly on the seedbed, but it makes much more sense to grow seedlings and transplant them to a specific place where directly sown seeds might not germinate.

Grow Zucchini Plants – When and How to Sow 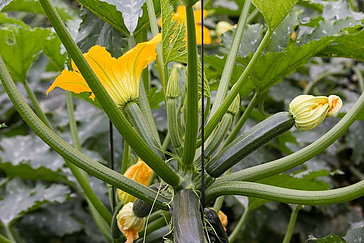 We grow the seedlings in the greenhouse or an external protective area (where we harden the other seedlings) with enough natural light. Growing zucchini seedlings coincides with the hardening time of tomato, pepper, pepperoni, and tomato seedlings. As seedlings, they should grow in an environment between 18 and 22 °C. Night temperatures can also be lower, up to 4 °C, which young zucchini can withstand successfully. Move them to a warm place when outside is lower temperatures, or reheat them overnight. For growing in a greenhouse, where we grow them only with the aim of an earlier harvest, they are sown and transplanted 20 days earlier. We have to grow them indoors (heated) because the seeds are sown already in early April.

Sow one seed 2 cm deep in individual medium planting units with the moist substrate at the end of April. Zucchini should not be transplanted. If we grow them in medium-sized plastic containers, we only fill them halfway with the substrate when sowing. As the seedling grows, the substrate is gradually added until it is filled to the top. Zucchini seedlings often have a long stem, and this manner strengthens them. Since they germinate successfully in the dark, we cover the planting units, which enables better germination due to constant humidity. We uncover as soon as we notice the first sprout, which can be as early as three days, and we immediately move it to a bright place. When the cotyledons open, it is time to transplant them into a large planting unit, that is, within 7 to 10 days of sowing. If the plants have “stretched” up to now, we plant them deeper when transplanting, right up to the cotyledons. Zucchini grows very quickly, so the seeds can also be sown in a large planting unit (skip the middle one). We water the seedlings regularly every other day, just like all the other seedlings we grow simultaneously.

When to Transplant and Planting Distance

Zucchini as a seedling is ready for transplanting 20 days after sowing or when it has formed at least one genuine leaf. We transplant them outdoors in mid-May. If the soil is not prepared with compost mulch, add compost to the pumpkins in the planting hole, as they grow best in loose soil with a higher proportion of organic material. We plant at a distance of 1 m between individual bushes as they expand considerably during growth. Due to its typical bushy growth, one zucchini needs 1 m2 of space.

Since the soil is already warmed up in mid-May, we can already think about summer mulch when transplanting the seedlings. Since zucchini have a long growing season, and it is difficult to remove weeds with a tool between its large leaves, it makes sense to use a flat mulch such as cardboard or felt made of sheep’s wool. This remains on the shaft for the entire growing season of the zucchini, so there is no need to worry about removing weeds. We prepared holes in the cardboard or felt where the seedlings would grow. Suppose the soil is dry; water the field completely, especially the planting hole, and transplant the zucchini seedlings. Do not transplant the seedlings deeper into the ground, as it will rot and damage the plant’s stem. There are no such problems with compost.

It grows best on its own so as not to shade other plants. Before the courgettes get a place on the bed, we can grow spinach, spring lettuce, and radishes in the same place. After the harvested courgettes, we sow cruciferous vegetables, spinach, or transplant seedlings of late radicchio or endive.

After transplanting the seedlings outdoors, water them daily until they take root well. Zucchini need moist soil all the time. Any weeds between the large leaves must be removed by hand. If we used cardboard or sheep felt, additional summer mulch is unnecessary, but after more than 14 days of dry weather, we water the pumpkins. Since the roots of zucchini go more than 3 meters far, watering neighboring beds (and garden paths) positively affects their growth.
During growth in July, remove older leaves and leaf stems to rejuvenate the plant. It forms male flowers on long stalks and female flowers, from which individual fruits are formed right next to the main stem. With each new leaf, the squash forms a new female flower, and since growth is extremely fast in the summer months, the fruit grows more than 5 cm per day. By picking and eating (female) zucchini flowers, we simultaneously regulate the speed and quantity of the crop. The male flower is also edible.

The most common problem is powdery mildew, which attacks and whitens zucchini leaves. It is usually a temporary condition that depends mainly on the weather. A hot and humid environment promotes the development of this disease. Mild forms of mold are corrected when the weather improves. Rarely is mold destructive to the plant.

By regularly picking fruits, we will encourage the formation of new ones, so we pick young zucchini up to a maximum size of 20 cm. So we pick (physiologically) unripe fruits. When growing bushy zucchini, the goal is not to grow bulky fruits that will make all the neighbors jealous but rather to grow small and tender fruits. Harvesting is done with the help of scissors, a knife, or with the hands by grabbing, twisting, and tearing them off. According to experience, regular daily picking of the fruit or conditionally the flower encourages the plant to bloom more vigorously and produce further fruits. Zucchini harvested in this way will remain fresh for a long time. We have the crop available until September, so second sowing is unnecessary, especially if we also grow pumpkins, which start to produce from August onwards. If we are exceptional fans of zucchini, we sow them again and transplant them to the field at the end of July so that we have a crop even in late autumn until the first frost.

If the fruits are not picked in time, they grow to a length of 50 cm or more, weigh several kilograms, and begin to ripen (physiologically), which exhausts the plant.

Zucchini is eaten raw as well as boiled and baked. Its flowers (male and female) are also edible, which we fill with various fillings (e.g., other vegetables and cheeses) and prepare a wonderful baked dish.

Zucchini is a seasonal vegetable that is best used fresh. Once torn off, it waits in the cold for a week or so. Some varieties of (ripened) pumpkins are also stored in the cellar, but their taste is less aromatic than that of pumpkins. For more extended storage, it is better to freeze it cut it into pieces, or pickle it.

When you grow zucchini in your garden, it’s a good idea to prepare them in a delicious recipe. For this purpose, I recommend the following book.