Pumpkin Is a Vegetable That Gives a Good Yield

Pumpkin is a vegetable that gives a massive yield with little effort. It needs moist soil with a lot of organic material and a sunny location. We grow them for the fruits, but also the seeds. Due to the significant need for space and the fact that it is an autumn vegetable that can be stored for a long time, it does not make sense to grow pumpkins in a greenhouse. We know several different varieties in taste, color, and size. The difference between courgettes and pumpkins is mainly in the way they grow, as courgettes grow bushy, while pumpkins grow lengthwise. All pumpkin varieties are grown in the same way. Properly stored fruits wait until the end of next spring and brighten winter dishes.

Pumpkins are sown once a year. They can be sown directly on the field, but it makes much more sense to grow seedlings transplanted to a specific place where directly sown seeds might not germinate. We grow seedlings in the same way and at the same time as we grow zucchini seedlings for outdoor growth.

Growing Pumpkins – When and How to Sow

We grow the seedlings in the greenhouse or an external protective area (where we harden the other seedlings) with enough natural light. Growing pumpkin seedlings follows the hardening off schedule of tomato, pepper, pepperoni, and eggplant seedlings. As seedlings, they should grow in an environment between 18 and 22 °C. Night temperatures can also be lower, down to 4 °C, which young pumpkins can still successfully withstand. Move them to a warm place at lower temperatures or reheat them overnight.

At the end of April, one seed is sown 2 cm deep in an individual medium planting pot with a moist substrate. If we grow them in medium-sized plastic containers, we only fill them halfway with the substrate when sowing. As the seedling grows, the substrate is gradually added until it is filled to the top. Pumpkin seedlings often have a long stem, which is how we strengthen it.

Since they germinate successfully in the dark, we cover the planting pots, which enables better germination due to uniform humidity. We uncover as soon as we see the first sprout, which can be as early as three days, and we immediately move it to a bright place. When the cotyledons open, it is time to transplant them into a large planting pot, that is, within 7 to 10 days of sowing. If the plants have “stretched” up to now, we plant them deeper when transplanting, right up to the cotyledons. Pumpkins grow very quickly, so the seeds can also be sown in a large pot (skip the middle one). We water the seedlings regularly every other day, just like all the other seedlings we grow simultaneously.

You can read more about growing squash and pumpkins in the book Growing Squashes & Pumpkins.

Pumpkin Is a Vegetable That Needs a Slightly Larger Garden 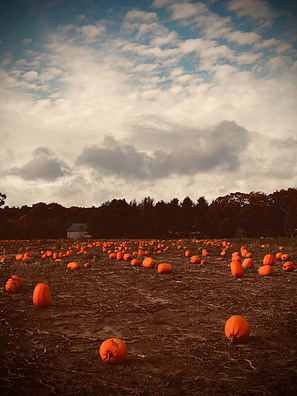 A pumpkin as a seedling is ready for transplanting 20 days after sowing or when it has formed at least one true leaf. We transplant them outdoors in mid-May. Due to its way of growth, it is almost a field culture, but we can also find a place for them in a slightly larger garden.

One plant needs 4 m2 of space, but there is no need to prepare the garden soil for this whole area where the pumpkins will grow. We prepare a special, smaller bed of 0.5 m2 for them, from which no more than two plants grow. The easiest way to do this is with compost, spread 10 cm thick, for which we need about one wheelbarrow. Or you can plant them on the edge of a bed, so it grows out of it. Water the planting hole abundantly. If we plant them in bare soil (without compost), we do not plant them deeper because if the soil is scorched on top, it can damage the fragile stem. They grow and crawl on a flat mulch – organic (paper or cardboard) or inorganic (agro textile), which is laid directly on the grass or garden surface.

Due to the special and large area that the pumpkin occupies by crawling on the ground, they are best caught on beds with higher growing plants. They perfectly complement a field with corn and long beans, and sunflowers. But let’s keep in mind that all tall plants shade pumpkins, which can be seen in slower growth and a smaller number of crops. Growing pumpkins on the bed behind the potatoes is also a very interesting way. While the pumpkin grows, we can start picking new potatoes in June. In this way, we make space for the pumpkin to grow. Next to the pumpkins, we can also grow watermelons or melons, which are also planted on a smaller bed and grow equally on the same flat mulch.

Pumpkin Is a Vegetable That Needs Some Care

After transplanting the seedlings outdoors, water them regularly every other day for at least a week. Weeds are regularly removed between young seedlings until the plant densely overgrows the surface. We direct the growing tendrils to the flat mulch, which we spread immediately in its entirety, or we do it gradually while the pumpkin grows. The free edges of the agro textile (which the pumpkin has not yet outgrown) are weighed down with stones or bricks. The black agro textile heats up in the sun, which suits the pumpkins. The top of the tendril is always in the air, so it cannot be burned. The leaves soon begin to cover the surface, shading it and thus preventing the agro textile from overheating. Crops formed in female flowers are completely pure with this method of cultivation.

If the pumpkins run out of space during growth, direct the tendrils back or spread an additional flat mulch. Much better than growing over the lawn, which makes mowing difficult. If we don’t mow the greens for more than a month in the summer, they will outgrow our pumpkins and shade them. Even the fruits on the mulch are clean and ripen evenly. Moisture, which is the key to a good crop, is retained under such a large flat mulch. Although the roots of the pumpkins cannot take root through the agro textile, the main root branches out under the entire covered surface (3 m or more), so the leaves of the pumpkins will not wither even during the greatest heat wave.

The most common problem is powdery mildew, which attacks and whitens zucchini leaves. It is usually a temporary condition that depends mainly on the weather. A hot and humid environment promotes the development of this disease. Mild forms of mold are corrected when the weather improves. For the plant, mold is rarely destructive.

During the summer heat, the leaves can wither during the day but “swell” back in the evening. This is a sign that the plant is very thermally stressed and does not have enough moisture available for cooling. Watering right next to the main stem does not add enough moisture to the roots, as they are already heavily branched.

From the end of August onwards, the leaves begin to dry, which signifies that the fruits are ripening. There is nothing wrong with that. At the beginning of October, the entire plant can dry out (and the fruits ripen).

Pumpkins are harvested when ripe, which is a big difference compared to courgettes harvested unripely, so immediate use begins in August or September. Pumpkins are left to ripen for a long time, even when the plant starts to dry in September or October. It is ready to be harvested for storage when the stem on which the fruit is located dries. We pick them together with the stem to minimally injure the fruit itself. Pumpkins for storage are harvested at the end of September or October, so they are not affected by frost. A temperature of -2 °C already destroys the fruits, so it is better to harvest them before the first salty one. For successful long-term storage, they are harvested on the day of fruiting.

If we grow pumpkins for seed production, we hollow them out in October and dry them.