Ljubljana Is the Capital City of Slovenia

Independent of Yugoslavia since June 1991, Slovenia is a parliamentary republic, member of the European Union since the spring of 2004. Ljubljana is the capital city of Slovenia. Other big cities: Maribor, Kranj.

Slovenia is a central European state on the southern edge of the Alps, bordered by the Adriatic Sea for 46.6 km and bordering Italy, Austria, Hungary, and Croatia. Its area is 20,373 km² and its population of 2 million.

Apart from the small coastal plain on the Adriatic, Slovenia is a country that belongs to the Alpine region and is almost everywhere covered with mountains. The highest point, located to the northwest, is Mount Triglav, 2864 m high. The Sava takes its source at the foot of this massif and crosses the country in its upper course from North-West to South-East. The Drava and the Mura also irrigate the easternmost region.

The climate of the coast is the Mediterranean, like that of neighboring Italy; in the rest of the country, the altitude conditions a continental climate with humid and sweltering summers in the valleys and cold winters on the plateaus and valleys of the East.

Flag and Symbols of Slovenia

This flag consists of three horizontal bands of the same width and colors of white (high), blue, and red, which come from the coat of arms of the medieval Duchy of Carniola. The Slovenian seal straddles the blue and white bands on the side of the flagstaff. Here you can see the white image on a blue background of the Triglav, the highest point in Slovenia, above wavy lines representing the seas and rivers and under three stars with six yellow branches arranged at the vertices of an inverted triangle. This coat of arms takes over the coat of arms of the Counts of Celje, the great Slovenian dynastic house of the late 14th and early 15th centuries.

National anthem: Zedravljica (A toast). Words of France Preseren; music of Stanko Premrl. Adopted
in 1989, this hymn was written in 1848; the complete poem, whose seventh verse is used as the anthem, speaks of Pan-Slav nationalism.

Ljubljana Is the Capital City of Slovenia 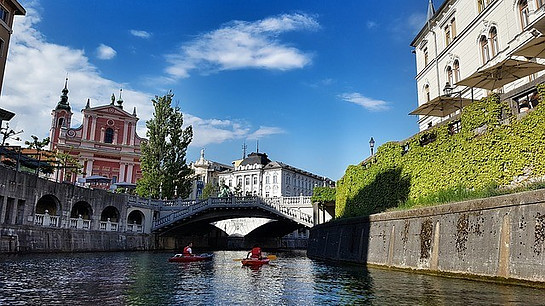 Ljubljana is the capital city of Slovenia, located along the Ljubljanica River, 300 m above sea level, and dominated by a castle. Ljubljana has a population of 270,000. This city already existed at the time of the Romans; occupied by the Slovenes in the 7th or 8th century, it received many German colonists in the Middle Ages.

At the time of the Reformation, it was the scene of the activity of Primus Trubar. Occupied by the French during the wars of the Revolution and the Empire, it became the residence of the governor-general of the Illyrian provinces. Nodier wrote for a while a French official newspaper, the Illyrian Telegraph, whose collection, probably today unique, is in the library of the city.

In 1821 from January to May, a congress was held at Ljubljana (Laibach), which united the emperors of Russia and Austria, the King of Naples, and the Duke of Modena. Its purpose was to stifle the liberal movement in Italy and lead to the occupation of Naples by the Austrians. The city became the capital of the Slovenian state at independence in June 1991.

In the southeast of Slovenia, there is also Šmarješke Toplice Thermal Spa. Overlooking the forests, vineyards, and meadows that surround you, you will surely forget all your worries and gain fresh impetus for any future challenges. A visit to our thermal pool is something special, because in the morning when the sun rises, fogs rise from the pool, providing a romantic experience. We are also sure that Vitarium Spa & Clinique will enchant you with ambiance and excellent services for body and soul.

Near the Šmarješke Toplice is a Mojca’s and Jože’s vineyard cottage. You can spend wonderful holidays in this cottage. You are invited.