Sheep in the Vineyard and the Organic Viticulture

Does a sheep in the vineyard pose a danger to the vineyard, or is it perhaps a good collaborator in organic viticulture?

Organic viticulture is part of sustainable agriculture, which, compared to conventional viticulture, reduces the negative impact on the environment and cares for human and animal health.

Organic production aims to increase or maintain soil fertility, ensure greater biodiversity, and thus plant protection and conserve natural resources. However, this does not mean that there are not as many work tasks in organic vineyards as in a conventional one, rather the opposite. For this reason, you can include animals in the organic production of the vineyard, which will perform various tasks and save a few euros on fuel and fertilizer. Production works well with simultaneous organic sheep breeding. 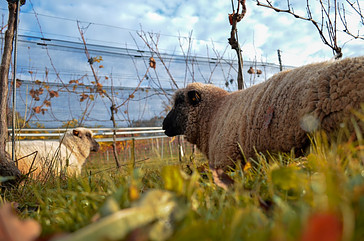 In New Zealand, You Can See Sheep in the Vineyard Quite Common

In New Zealand, this method of cultivation has been used by winegrowers for about 10 years. Statistics show that in 2019, as many as 59% of such vineyards with simultaneous sheep breeding were found in New Zealand. It is also possible to see it here in Slovenia.

The usefulness of Sheep in the Vineyard

This production method requires a bit more time and space planning, as the vineyard is divided into herds (several acres to 3 hectares in size – depending on the size of the vineyard and the stock).

Sheep help with the work in the vineyard at different times.

The first job they do is to graze the inter-row space and then the spaces in a row, so there will be less mowing. Constant grazing under vines reduces the possibility of weeds. At the same time, they fertilize the surface with their secretions, which helps to increase soil fertility. Twigs and leaves that grow in the area of ​​cluster growth are torn along the entire length of the trunk. Sheep will not touch unripe bunches, but later in the ripening period, and when the pastures run out, they will also be able to afford some grape, so they need to be moved to a new fence in time. When setting up a new vineyard, it is possible to adjust the cultivation form of the vine accordingly so that a higher cultivation form is obtained, or a lower breed of sheep is introduced into the existing vineyard (in this case, they will not remove the leaves). Leaf removal is best entrusted to sheep, as the sheep will tear the leaves more accurately and with more feeling than a human or machine. The canopy in the area of ​​growth of grape clusters will be more open and airy, which means less chance of disease occurring in wet weather. Manual removal or threshing with a machine is only necessary on the upper parts of the vine where the sheep cannot reach. Another good thing is that the sheep will repel the birds and protect the ripening berries, or at least the birds will not dare to go to the vineyard so often. The best part about this is that the sheep happily work 7 days a week, effortlessly.

Three Ways to Use Sheep

There are various options for introducing sheep into organic vineyards, some of which have already been mentioned. The first way is to use them only for grazing. In this case, the sheep are not introduced during the growing season but only in the period after the harvest (late autumn) until the first appearance of buds (early spring). Another way is to use them for a short time, that they remove the leaf mass in the grape-growing area and open the canopy of the vine. The third way is year-round grazing of lower-growing breeds that will graze only grass.

Damage That Sheep in the Vineyard Could Cause

Adult sheep generally do not harm (if moved to another herd in time), while lambs can do some damage by jumping during play and possibly rubbing against the cane trunk in the presence of parasites, or even adult sheep by too long wool. Or, if the vineyard’s location would be unsuitable, wetter, the possibility exists that sheep would compact the soil. That would damage the structure of the soil.

Use of Plant Protection Products

In the case of simultaneous sheep farming and organic wine production, fewer means of protection are used plants as if we cultivated only an organic vineyard. We must first look at animal welfare; therefore, most attention is paid to the temporal placement of sheep in the vineyard and the use of funds for plant protection (their withdrawal period, etc.).

Australian farmers fell into two issues: the potential impact on the health of plant protection products on sheep and the possibility of later detecting residues of these products in the meat. Only products based on copper and sulfur are allowed in organic production, vegetable oils, pyrethrins, microorganisms, etc., but some organic products can also be detrimental to sheep health. Especially the copper-based ones. Some scientific studies report that sheep are the most sensitive to cooper among farm animals. It most often accumulates in their livers. Growers did not detect any problems with the use of sulfur-based plant protection products. In any case, it is better to consider the waiting period or extend it by one to two times before bringing the sheep.

Resistant and Tolerant Vine Varieties Are a Good Alternative

When agricultural policy tightens climate change measures in the coming years, the best alternative will be selecting and introducing new resistant and tolerant vine varieties. Some countries already plant resistant varieties, but we should not plant them everywhere if they are not included in the vine selection.