The sparkling wine making process starts with a grape harvest and ends up in a glass. In this article, I will guide you along the path of this mystery.

The Sparkling Wine Making Process Begins With the Harvest 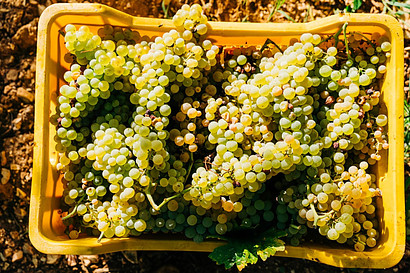 The sparkling wine production method demands that grape harvest is done when technological maturity occurs, which occurs earlier than for the production of still wines. Grapes are harvested by hand with the separation of diseased berries. Grapes must have higher total acidity and lower sugar content. The amount of sugar must be 75 – 85 ° Oechel, and the value of total acidity must be 7 – 8 g / l.

The basic indicator for determining the harvest time is the ratio of accumulated sugar and total acids in the grapes (harmony).

Wines that are a good basis for the production of sparkling wines are usually inharmonious in taste due to the higher total acidity, without foreign tone, typical of the variety, which must be elegant. The color of the wine must be pale greenish-yellow. The juice must contain 18 – 20% sugar. The strength of the wine should be between 9.5 – 10.5 vol. % alcohol, and by no means above 11.5%, while the value of total acidity should be around 7-8g / l. We conclude that the wine must be of moderate strength with a slightly higher total acidity. If the wine were with less vol. % alcohol, after the addition of expedition liqueur, due to low alcohol content, there would be a possibility of subsequent fermentation in the finished sparkling wine. Accordingly, in wines with higher vol. %, secondary fermentation is difficult to start because the selected yeast tolerates up to 12 vol—% alcohol.

Attention Is Required in the Processing of Grapes

The selected grapes are first processed with a grape crusher destemmer, which mashes the berries to make it easier to drain the juice and removes the stalk. First juice is a fraction of the must obtained without the use of pressure and at the same time the highest quality fraction of must, especially in terms of the amount of sugar. The grapes are not sieved but placed in hydraulic presses so that the must is drained directly. By omitting the slurry, damage to the skin and the transfer of a larger amount of dye to the must and later to the wine is avoided, especially in the case of red varieties. After squeezing, sulfurization is performed, which should be very mild, so sulfur with 10 – 15 g / 100L of potassium metabisulfite, and then cooled to 8 -10 ° C between 10 -12 hours, then clarified and placed in boiling barrels into which selected wine yeast is added. Fermentation lasts 2 – 3 weeks, where the fermentation temperature should not exceed 15 – 20 ° C, then cold stabilization is performed at a temperature of – 5 ° C for several days.

Cooling is performed by taking the wine to the above-ground basement, outside in the winter, or in an artificial way using refrigeration devices.

Carbon dioxide is the main reason for secondary fermentation, and the CO2 pressure in the bottle itself depends on the amount of sugar added. The more sugar in the bottle, the higher the pressure. By law, the minimum allowable pressure in a bottle is 3 bar, and it never exceeds 5-6 bar because most bottles could not withstand higher pressure.

Given the manner and conditions of secondary fermentation in the production of sparkling wines, 2 procedures are possible: the champenoise method (traditional), and the charmat (tank) method.

To carry out secondary fermentation and create the required amount of carbon dioxide, an appropriate amount of sugar and selected wine yeast is added to the base wine. The almost basic wine is inoculated with a pure culture of selected wine yeast. Such yeast is rehydrated at a temperature of about 25 ° C, at which it multiplies, and later the multiplied yeast is added to the base wine. He must successfully carry out secondary fermentation in wine with 9.5 – 10.5% alcohol and must be able to carry out fermentation under relatively high pressure of 4 – 5 bar and a low temperature of 10 – 12 ° C. Upon completion of fermentation, it must settle quickly and give compact sediment. It must not leave any foreign odor in the wine.

The yeast to be used is chosen based on the assumption that after fermentation, it will form a fluffy structure and easily slide into the bottle’s neck when the bottle is turned.

Pt = pressure to be obtained in the bottle.

At = coefficient of absorption power of wine.

With a precisely determined syrup dose, multiplied wine yeast is added to the wine, and the whole mixture is homogenized using circular stirrers.

Filled bottles are placed in a horizontal position on special shelves so that the cap is constantly moist and therefore does not leak carbon dioxide. The basic condition for obtaining quality sparkling wine is secondary fermentation at a temperature of 10 to 12 ºC, which is stable and has no oscillations. In this way, the carbon dioxide created dissolves more and binds better with ethanol. Fermentation begins after 2-3 days, and due to low temperature and the presence of a certain amount of alcohol (10-11%), it can last 5-6 months. If fermentation does not start on time, the bottles should be shaken and moved to a warmer room until the start of fermentation and then returned to a cooler place. You can accelerate fermentation by raising the temperature, but in this case, poorer quality of sparkling wine is obtained.

The Measurement of the Pressure of Carbon Dioxide

The fermentation process is monitored by measuring the pressure of carbon dioxide with special manometers through a stopper. All the sugar should be boiled by boiling, creating 1% of the new alcohol and the appropriate amount of carbon dioxide, which all remain in the bottle. If the expected pressure is not obtained after fermentation, considering the amount of added sugar, it means that the fermentation has stopped prematurely and that there is still unfermented sugar in the wine. To avoid this, it is desirable to shake the bottle 2-3 times during the fermentation. The bottles are shaken so that the throat first turns downwards, and then by turning the bottle around the axle, the wine turns around, and the sediment starts to lift. By initiating the sediment, it allows better mixing of its particles of various dimensions, and later they stick together better and settle faster. Otherwise, larger particles are deposited first, and then smaller ones, which later makes it difficult for the sediment to descend into the bottle’s neck. The sediment consists of yeast cells, tartar crystals, and particles of protein and other wine substances. The first shaking of the bottles can be carried out 3 to 4 months after filling. Shaking in the first year is carried out at least 2 times, preferably every 3 to 4 months. If the wine is kept on the lees for 2-3 years, then in the 2nd and 3rd year, the bottles need to be shaken at least once a year. At the end of fermentation, the bottles are cooled to eliminate the unstable part of the tartar and settle and clarify the wine faster.

Maturation – Aging of Wine on Yeast

During the maturation of the wine on the yeast, the style of each sparkling type of wine is created. During this period, yeast autolysis, malolactic fermentation, processes that result in significant changes in the composition of wine. One of the key elements on which the quality and style of sparkling wine depend is the decision when to start turning the bottles. Namely, aging on yeast is, after blending, the second decisive factor of quality. The process of yeast death after secondary fermentation is called yeast autolysis. In the case of sparkling wines, aging on the lees lasts 1 – 3 years. During this time, yeast cell autolysis proceeds. Then there is a change in the composition of sparkling wines: the number of nitrogen compounds, sugars, fatty acids, and aromatic compounds such as higher alcohols, esters, terpenes increases.

After aging, the sediment is gradually lowered from the side into the neck of the bottle. Because of that, the bottles are placed on sloping shelves in the shape of a house roof. Each bottle has its own tray on the shelf and is placed obliquely, with the neck down. The sediment is lowered gradually so as not to cause turbidity. Later, this operation is repeated every few days, with the bottle being placed in an increasingly vertical position. Due to the need to start the precipitate, the bottles partially rotate around their axis when turning. The precipitate is in the bottle’s neck when it is rotated 360 ° in relation to the original position. Turning the bottles takes 1 to 2 months because it takes so long for the bottles to reach the maximum oblique position and for the yeast to settle in the bottle’s neck. You can turn bottles by hand or using devices called gyro pallets. The bottles in these devices are housed in lattice boxes and move around to mimic manual turning movements. The advantage of gyro pallets is that the rotation is carried out with a large number of bottles simultaneously and ends in a much shorter period of time. To achieve better deposition and avoid sparingly soluble “yeast masks” on rough glass surfaces, bentonite-based agents can be added to the yeasts.

Once the sediment has come out of the wine into the bottle’s neck, it is thrown out, and this process is called disgorging. This is the most sensitive phase of secondary fermentation performed by specially trained and trained workers. The procedure is performed manually and consists of removing the cap, ejecting the sediment, and re-stopping the bottles.

Preparation and Addition of Expedition Liqueur

After the sediment is discharged, the expedition liqueur is added to the bottles using a machine that automatically measures the amount of liqueur, which depends on the type of sparkling wine, i.e., the sweetness to be achieved. Expedition liqueur usually contains 70% sugar and is prepared in a smaller amount than the wine used for champagne. Usually, in 100 l of liqueur, citric acid is added 200-300g and about 5 l of wine distillate, which should be 5-8 years old, and that is obtained by double distillation of quality wine. It must have a nice smell. Expedition liqueur is added to sparkling wine to sweeten and improve the taste and aroma.

In this regard, there are three types of sparkling wines:

After adding the liqueur, the bottles are closed with new corks made of quality cork, which is done with a corkscrew for champagne corks. A metal cap is placed over the cap for safety reasons, and a wire mesh is attached over it, which is attached to the neck of the bottle. The bottles are then gently shaken to mix the liqueur with the wine, after which they stand for 2-3 months in a cool room to harmonize the ingredients of the liqueur and the wine.

After that, it is necessary for the bottles to age for a few more months to spark wines to mature and age, thus forming bouquet materials.