The Best Wine From Slovenia for Me Personally

As a cviček lover, I have to point out that Cviček is the best wine from Slovenia. Tastes, of course, are not discussed. Cviček is a unique wine from Slovenia. Like Italian Chianti for example. The cviček mystery is in combining various white with red varieties. Because of these varieties, it has an attractive, light red color with a slight ruby cast, and fresh fruity aromas, with an emphasis on red fruits (red currant, raspberry, and cherry). Cviček is a dry wine, with low alcohol volume (between 8.5 and 10%) and slightly greater acidity. It charms with its lightness, ease of drinking and components well-suited to the dynamics of today, and the desire to eat moderately and healthily.

More About the Best Wine From Slovenia

What are the characteristics of Cviček as the best wine from Slovenia?

When I have mentioned the localities where Cviček grapes are grown, 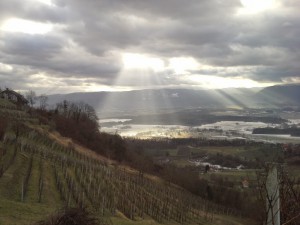 I shouldn’t forget Bučka, Malkovec, Trška gora, and Vinji vrh of course. Vinji vrh is the place where my vineyard cottage is rising to the sky. It goes without saying that here is the most beautiful place in the world with the best wine from Slovenia.😊

So cviček is the unique wine in the world made of both white and red grapes. Cviček is a mixture of varieties that have survived louse. This fact also talks about his authenticity and strength. And could be one reason more why is the best Slovenian wine.
In the name of truth, I have to mention that cviček was the synonym of cheap wine for a long time. Thus it was until Slovenia’s independence that the winemakers of Dolenjska decided Cviček would once again be on the wine lists of fine Paris restaurants. Because of that, Cviček’s reputation and quality are again at an excellent level.

Cviček is protected with the mark of a recognized traditional denomination (PTP), so since 2001, Cviček made only in the Dolenjska(Lower Carniola) wine region.

Last but not least, only the best Slovenian wine, named CVIČEK, can bring you all those benefits as follows. As it contains flavonoids, Cviček is assumed to own healing qualities. It is suggested for loss of appetite, coronary diseases, anemia, weight-loss programs, helping reduce cholesterol levels.

Cviček PTP is a delicious wine with many centuries-long traditions. It is made of reddish, red, and white wine varieties, which ripen in the Dolenjska wine-growing district.

Cviček excites us with its mild taste of high quality. Among the red wines in it prevail žametna črnina and Blaufränkisch, while the prevalent white wines are Portugais rouge, Italian Riesling, and Silvaner. This exact combination gives it its distinct taste. Its quality is also proven by numerous awards from various wine competitions. Cviček is a dry wine with a low alcohol content of up to 10.0 vol. %, which reflects its homeland region of Dolenjska. Light, fresh, drinkable but at the same time lively wine cviček is the wine of the modern man.

Today cviček is protected within the European Union with the mark PTP, a recognized traditional denomination, which ensures its high quality and simultaneously sets strict rules, according to which it can only be produced in its one homeland, Dolenjska. This fact is what makes this wine unique.

Cviček creates opportunities for pleasant socializing and playfulness. Its characteristics are the light red color with a ruby shade and lovely fresh fruit aroma, resembling raspberries, strawberries, and currants.

It is an excellent wine for every day, appropriate for a contemporary lifestyle and culinary pleasures on various occasions. It is a perfect companion to many dishes since it complements various tastes with its lightness and vivacity, and is especially appropriate with dried meat and meat dishes. It develops the best aroma served at the temperature of 12 – 14 ºC in a stemware glass of special tulip shape.

Besides the incredible taste cviček also has many positive influences on our health since it contains, in comparison to other wines, significantly more acid and lower alcohol levels.   Due to the low alcohol content and without fermented sugar it is classified among dietetic wines. Cviček is thus also appropriate for people with diabetes.

What Ingredients Are Necessary for the Best Wine From Slovenia 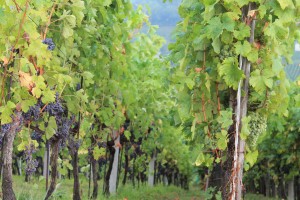 Žametna črnina is a grape variety native to Slovenia, which grows predominantly in the Dolenjska region. Žametna črnina is one of the oldest domesticated grape varieties in Slovenian. A single vine of Žametna črnina growing in the Slovenian town of Maribor is determined by the Guinness Book of Records to be the oldest living vine still giving fruit on the planet at over 400 years of age. Žametna črnina is a late variety that ripens in the middle of October. It requires a better vineyard location. It is almost resistant to winter freeze, but less toward the spring freeze. From the start of flowering to the full sweetness of the grapes takes about 170 days. The cluster is big, average compact, and weighs an average of 250-400 g. Žametna črnina grapes tend to ripen to high sugar levels and produce delicious wines with a remarkable sweetness and residual sugars.

Blaufränkisch is the central red variety of the Sava region which yields excellent red wines. Probably this is the best wine from this region. It is enjoyable as a young wine, but by longer maturing, we get intensively colored big wines with various unique aromas and gentle tannins. The organoleptic character of Blaufränkisch is formed by climatic conditions, soil, variety, the manner of grape processing, and cellaring of must or wine. It is not a widely world-known type, probably because it does not originate from France. Nevertheless, in the Dolenjska region, we believe that we can make a Great red wine from this variety.

It contains about 12.0 vol. % alcohol, a discreet fruit taste, and a pleasant freshness, which persists a long time with maturing. It is also distinguished by the high content of antioxidants, especially resveratrol, which has a positive effect on our health. Resveratrol lowers the general level of cholesterol and increases the beneficially high-density lipoprotein (HDL) which protects the heart. It also prevents cancer diseases thus a moderate consumption of Blaufränkisch during meals is especially recommended. 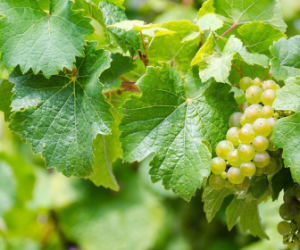 The variety originates in France and is one of the most widespread types. In Slovenia and the Dolenjska region, it offers wines of all quality classes, from table wines to high-quality and predicates wines. Italian Riesling is a high-quality wine from the Dolenjska wine-growing district. The wine has a pleasant, full, balanced taste with an expressive bouquet. Both, dry and sweet wine gives the impression of lightness and reveal its character through mild alcohol and fruit bouquet. The Italian Riesling is a great company for fish dishes, fried chicken, turkey steak, veal stew, and various cheeses. Try and see that it also makes a wonderful spritzer!

Grapes are more yellow on the sunny side, so the adjective for this variety is “red” Kraljevina. Inadequate weather conditions at the time of flowering can significantly reduce the yield (due to oval), which is otherwise large and regular. The wines from her grapes are usually slightly alcoholic and very acidic, so consumers often mix them with mineral water before drinking, making them softer. The most significant quantities of Kraljevina wines are consumed in households, which small wine-growers produce for their own needs and not for the market.
The smaller part of the Kraljevina produced is also on the market, where they can be found either under the name of a cultivator or labeled with some fantasy name. The wines of the Kraljevina most often contain from 9.5 to 10.5% vol., and between 6 and 6.5 g / l of total acids, and therefore the quality potential could be a good basic wine for the production of light and gentle sparkling wines.

All this mix together is a base for the best wine from Slovenia named Cviček.