Viticulture and Wines of Slovenia With a Rich History

Quality wine! Modern vineyard! Wine industry! We cannot talk about viticulture in Europe without mentioning the Wines of Slovenia. Today, Slovenia is the pride of Central Europe in terms of viticulture. I have rightly called it, without pretension, “the wine-growing Republic of Slovenia.” Slovenia is located on the border between southern Europe, the Mediterranean Sea, and the Alps. The Slovenian Alps, broken down into 3 zones (the Julian Alps, Kamnik-Savinja Alps, and Karavanke chain), dominate Slovenia to the north-west and near the Austrian border. The Slovenian portion of the Adriatic coast stretches approximately 50 km from Italy to Croatia.
The history of wine and Slovenia does not date from today! Little discovery of the history of Slovenian wines? Here we go!

A Brief History of Viticulture and Wines of Slovenia

The Celts were the first to produce wine in the territory of present-day Slovenia, 400 years BC. The arrival of the Romans in the first century AD led to the expansion and development of viticulture. In the Middle Ages, following the Christianization of the Slavic peoples, most of the vines owned the Catholic Church.

I should note that the Podravje region is home to a scarce red grape variety: “žametovka.” What would be the oldest vine in the world is a vine. Since that is its name, the “stara trta” is located in the historic center of Maribor. Two engravings, dated 1657 and 1681, depict a house with a vine-covered pergola that occupies its entire facade. This is proof that in 1657 this plant was at least a hundred years old.

In 1880, the arrival of phylloxera, which ravaged the vineyards of Europe, brought a halt: Phylloxera destroyed half of the Slovenian vines.

If viticulture experienced a revival in the 1950s, it was achieved by quantity to the detriment of quality: the vine was a state affair.

In the early 1970s, legislation and regulations relating to the protection of Slovenian wines directed winegrowers towards the production of quality wines.

Progress was rapid after the collapse of Yugoslavia with the emergence of private property in the 1980s and 1990s.

“The Wine Republic of Slovenia”

The Wine From the Oldest Vine in the World 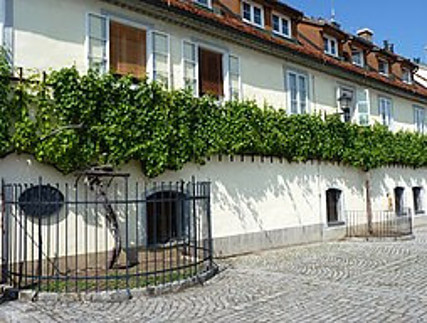 For more than 400 years, Maribor has been home to a žametovka or Modra kavčina grapevine, which is one of the oldest cultivated grape varieties in Slovenia. A true national attraction, this vine stock yields up to 55 kilograms of red grapes each year. After the festive harvest, the town cellar masters carefully vinify the grapes into žametna črnina wine. They then pack it in specially shaped 25 cl bottles.

Wines of Slovenia in Harmony With Nature

Taste the power of the juice of the trellis in which the harmony of man and nature is reflected. Nature-friendly Slovenian wines are produced in a responsible manner towards nature. Vineyards are part of the natural ecosystem. Winegrowers use only natural products to protect the vines. It is customary that human intervention in vineyards and cellars is kept to a minimum.

White or red, with an exuberant aroma, powerful, full in the mouth or light, dry or sweet: whatever your type of wine, you will find your happiness in the 3 wine regions of Slovenia!

By their quality, the fine wines of the 3 Slovenian wine regions and their 9 wine regions rank among the best in the world. Thanks to the diversity of their terroirs, their climates, and their wine-making methods, each wine-growing region has its own selection of grape varieties. The Slovenian vineyard is located at the center of the latitudinal band of European viticulture. The Slovenian wine regions share the same ideal latitude for the cultivation of vines as Burgundy in France. At the same time, the complexity of pedoclimatic influences allows Slovenia to offer wines of great diversity. No less than 52 grape varieties thrive in the country!

Great Wines of Slovenia Nominated Among the Best In The World

Wine production in Slovenia has become an art in its own right. More and more authentic winemakers are investing all their energy in their wines, and some of them are being recognized with prizes in Slovenia and around the world. So at this year’s Decanter World Wine Awards – considered the world’s largest and most influential wine competition, our winemakers achieved record results. Five of them received a platinum medal for their wines, 7 winemakers (a record for Slovenia) obtained gold, 60 received the silver medal, and 114 left with the bronze medal. Here’s a look at the winemakers and wines back from London with a platinum medal.

“Teran” Wine, an Ally for Health!

Teran wine, produced from the refošk grape grown on red karstic soils, contains one of the highest levels of anthocyanins in this part of Europe. Anthocyanins have a demonstrated beneficial effect on health. Scientific studies have established that moderate consumption of teran has an effect on preserving the health of the cardiovascular system and the brain.

A bottle of prestigious Slovenian dessert wine has been sold for half a million euros! The bottle features a diamond, which further increased the value of this noble refošk dessert wine with white truffles. The wine was part of a prestigious series of dessert wines embellished with honey, vanilla, and white truffle, which are also sold at more affordable prices.