What Is a Wine Cave, a Natural Wine Cave?

What is a wine cave? What is that real and natural wine cave? There are places and locations that still amaze and fascinate me. Here in Slovenia is a beautiful sandy world, so unique and yet undiscovered. Is it a miracle of nature or the work of human hands? Or both? Nature was generous in these places. The skillful locals of Brezovica, Bizeljsko, Pišec, and Globoko recognized her generosity and took what she offered when it was revealed in fine grains of quartz sand.

They have formed repnice(turnip caves) over two hundred years old, and some of them still live today. In the luster of thousands of crystals of brown-yellow sand, the past meets the present. It is still possible to perceive the joy and pleasure of a good harvest, once because of turnips and other fields product, today especially because of noble wine drops. Today, the former refuge from turbulent times can be a return to silence and peace, the mystery and creativity of man and nature.

The path of the turnip caves is the path of discovering and getting to know each other, as well as the way of simple pleasures when we can try the best that ripens in the cave, then nurture there, and sparkles in our glasses.

There are still people who open the sun door for us in the world of turnip wine caves, and hopefully, there will be more. It’s nice to share this world with them for a moment. The glow of the hidden light casts shadows on the sandy vaults that stand so majestic and mighty while disappearing downward with their eyes down the turnip cave.

It is as if time has stopped and the sand is no longer crawling. It is as if nature has transcended the law of transience. How unique would it be if you could take that moment with you into the world up there when the sun door closes behind us…

What Is a Wine Cave, a Turnip Cave? 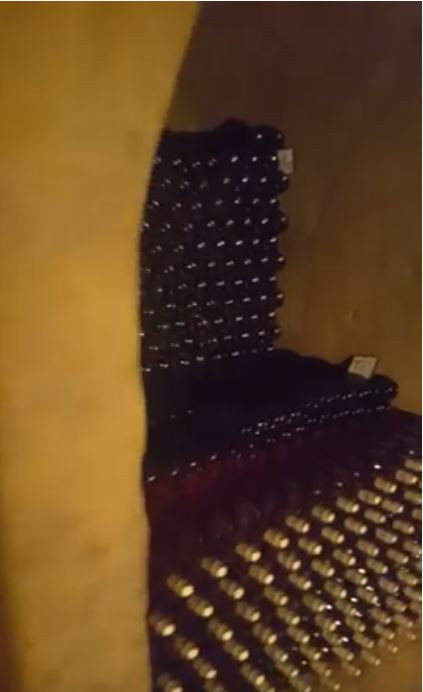 Some Bizeljsko locals, especially from Brezovica, Stara vas, and Pisece all the way to Globoko, dug caves of various sizes into the silica sand. They also encountered shells, remnants of the Pannonian Sea, when they had dug. The sea applicated more or less fine sand, which accumulated over time and allowed the locals to excavate such natural pantries for food. They did not use classical building materials, except for the construction of the entrance, which had to be specially hardened to protect the turnip cave from external influences of the weather. Bathing was a difficult task. At work, they used a pick and shovel, a wheelbarrow to remove sand, and a special scraper to level and shape the walls and ceiling. The interesting thing about the tool is that the pick had to be forged every day because during the work it became very shabby and like consequence even unusable.

What Were Turnip Caves Used for – Advantages?

Caves were sometimes used primarily to store crops. Due to the constant humidity of about 95% and the temperature of about 8 ° C, during the period when there were no cold stores and refrigerators, such a storage space was the most suitable. People say that the apples stored there are fresh and firm until the next harvest. Smaller farms only had more modest caves, while larger and more affluent farms had more, each for a specific crop type. They were also used to cook and store brandy, meat, and other foods. They also came in handy during the war, when the locals hid in them and through the underground tunnels escaped from the house into the forest in danger. The great advantage was that people did not need building materials when building their turnip caves.
Their use can be compared with t. i. earth house – holes dug into the fields, where people who did not have the ability to dig their turnip caves also stored food. In contrast to earth houses, turnips were longer persistent, closer to farms, and easier to access. Because of all the benefits, some also rented them to store their produce. Many of the turnip caves are still in the middle of the vineyard areas and many of them had a wooden entrance hall. The entrance hall was an occasional outbuilding and was designed to store spray, lime, and tools.

For What Is a Wine Cave Used for Today?

Today, they are still used in some places to store field crops, vegetables, and fruits. Due to their favorable climatic conditions, they are mostly used for the ripening and storage of wine. The high humidity in the caves is not the best for wooden barrels, so the winemakers kept a precious drop in them after they began pouring them into a stainless container and bottles. Today, the turnip wine cave is also an ideal place for tasting the typical wines of the Bizeljsko-Sremica wine-growing region. The owners of such premises like to offer their guests precious wine. Sandy holes represent an important tourist attraction in the area, with six turnip wine caves currently open for viewing.