When to Prune Grape Vines?

So when to prune grape vines? The vine pruning is one of the first winter-spring manual works in our vineyards and is the most demanding task for the winemaker. The pruning regulates the yield and load of the

vine, which decisively affects the quality of the grapes and the wine we want to produce.

On overloaded vines, the grapes will not ripen well, and the vines will deplete over the years. On the vine, where the load is too small, strong growth will be exposed, which will delay the development and ripening of the grapes. We make the vine pruning when the vine is at rest, from December to the time when buds begin to grow.

When to Prune Grape Vines If They Are Still Young?

Young vines which are more prone to frost, are pruned later, as early pruning promotes the growth of buds. The correct pruning allows for adequate illumination, consistent growth, and nutrition, saving us time in making the green cut, which follows later when the canes grow to about 10 cm.

Various pruning forms are known in the wine-growing tradition, which also depends on the variety. Those in Slovenia who live by the sea, e.g., often prune to the cordon, and in the rest of Slovenia, we prune to one or two cane.

Below are just a few of the basics that anyone who does this job needs to know. In any case, we advise you to periodically refresh and supplement your expertise by attending a demonstration of grapevine by expert advisory services and flipping through a book on viticulture (we recommend “Vine Pruning By (author) Frederic T. Bioletti “).

Before starting the work, take a look at some of the vines that you trimmed last year and try to analyze the suitability of the load and distribution of the native shoots. You need professional help and advice, especially when the shoots are short and thin if a large number of vines are dying if the development of the vine has been weak or awakened-focused on growth, not on grape production. You can look for the reasons for this condition in the fertilizing-nutrition of your vineyard, tillage, and pruning.

Types of Wood on the Vine 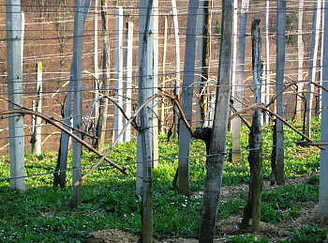 Always put attention that the vine will not be overburdened and overshadowed, which most often happens in the central part above the trunk where the most shoots are growing!

When cutting, cut the cane 1 to 1.5 cm above the last bud; if we are pruning early, it is usually cut a little higher due to 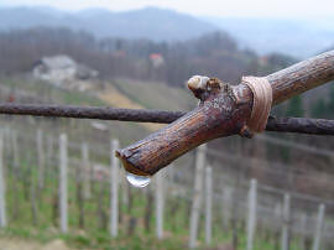 possible frosting of the wood.

The length of the cane also depends on the variety. As a rule, varieties that have larger grapes grow better if you cut shorter. For varieties with smaller clusters, cutting to one longer cane is also effective, since the buds at the base are less fertile than in the middle. The length of the cane has to be adjusted to the condition of the vine and the living space available to the vine. During the pruning, we also clean the trunks. Cut out excess wood and remove it from the vine.

We bind the vines to position the buds on the supports and to increase their overgrowth and fertility. The way of bending depends on the form and variety. We attach them to a wire, for which we can use different materials: willow, wire, and various artificial materials, which can be used as handy tools to make work faster. It is good that the canes are tied before buds are filled with liquid.

After the winter cut, when the vines sprout in the spring months, we do the green work, also an important task that is not to be missed!

I wish you much success and pleasure. Many winegrowers swear that winter pruning is one of the most enjoyable tasks in the vineyard!

However, the pleasure of pruning can only be experienced with proper pruning shears.

I learned the most from the book, so I recommend an excellent book to those interested in this topic.

Amber Revolution: How the World Learned to Love Orange Wine

You can also find a good explanation all about vine pruning here in this video.