Recently, the white wine making process is carried out mainly in tanks. This type of process is carried out primarily for economic reasons. For the care of top-quality white wines, well-established wine-growing areas have not given up on wooden barrels, as they use barrels for alcoholic fermentation, possible biological deacidification, and several months of care on fine lees.

Recent developments in oenological knowledge allow us to understand why this empirically developed method of care (traditional care) helps to preserve the aroma and higher stability of the wine at the same time. Wood can upgrade the wine aroma and taste of premium wines, the yeast ingredients that pass into the wine, preserve the aroma from oxidation, and stabilize the wine to proteins and tartrates.

Practitioners are well aware that white wine is grown in a tank on lees usually acquires unpleasant odors (reductive). These wines are usually poured for the first time after completing the alcoholic fermentation, sulfured, and separated from the yeast. Due to the removal of fine lees, the tank’s wine quickly loses its freshness and fruitiness but acquires heavier aromas, which reduce its quality. It is recommended to bottle white wines stored in this way soon. How to provide the wine in the tank with just the right amount of oxygen needed to prevent reductive aroma development and not to oxidize the wine? Today, there are technical solutions for supplying any amount of oxygen to the wine. 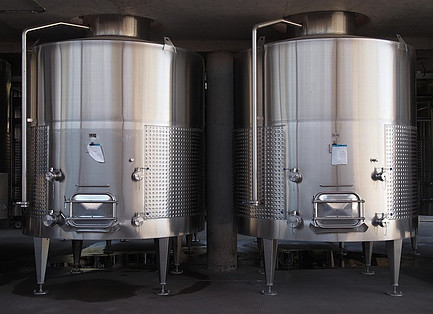 To master and successfully nurture white dry wine on coarse lees means to prevent the appearance of reductive sulfur, volatile aromas during the course of alcoholic fermentation, which is often perceived as unpleasant.

Sulfur substances, which represent reductive aromas, are divided into two groups. Heavier flavorings with a boiling point above 90 ° C and lighter flavorings with a boiling point below 90 ° C. Among the heavier aromas, methionol with a 1200 μg / L detection threshold is found in wine and plays an important role in the negative reduction of wine. E.g., at 838 μg / L, the wine is detected, and at 1776 μg / L, it is very reductive. Yeasts produce Methionol during alcoholic fermentation, and its content remains stable in wine during care. It smells unpleasant – after-boiled cabbage (Lavigne et al., 2002, 87–92).

Other sulfur compounds that belong to the reductive process are mainly hydrogen sulfide (H2S), methanethiol (CH3SH) with a boiling point of 6 ° C and less frequently onion-scented Ethanethiol (CH3CH2SH) with a boiling point of 35 ° C. These substances are mainly the result of yeast metabolism, and the amount increases during wine care, especially if the wine is still on coarse lees.

Avoid Turbidity of the Must

The higher sulfur content of the must before desulphurization promotes the development of methionol. A dose of 80 mg / L significantly increases its formation during alcoholic fermentation. A dose of 50 mg / L added at one time is sufficient to stop the enzyme polyphenol oxidase from healthy grapes, which may be an orientation for the sulfur rate.

Barrels that are empty conserved and regularly sulfured with strips emit SO2 into the must. This is followed by an above-average amount of H2S produced by yeasts during alcoholic fermentation.

The last danger for reductive aroma’s appearance after the completion of alcoholic fermentation is the first sulfurization of wine. Wines that have been sulfur prematurely in the presence of yeast produce a lot of H2S. To avoid this danger, it is sufficient to postpone sulfurization for ten days. The amount of H2S produced by the enzyme in the presence of SO2 is so small that it cannot be determined in our laboratory (cellar) conditions.

Phenomena That Trigger Wine Reduction on the Yeast Care

It is sporadic for a defect in reductive aromas to develop during the care of all the “biomass” (coarse yeast) in the barrique. Under these conditions, a progressive reduction in the volatile thiols of wine, H2S, and methantiol, which is normally present at the end of alcoholic fermentation, is even observed. This reduction in H2S and methantiol content is observed earlier in the new barriques because greater oxygen access to the wine is allowed through the pores and because the wood tannins act as a catalyst in oxidation.

Controlling or preventing the development of reductive aromas in large tanks is more difficult. The presence of yeast under the wine in the first month after the end of alcoholic fermentation means the inevitable development of reductive odors. In such a case, with the timely removal of coarse lees before the reduction process begins, further care on fine lees is no longer risky. The early first flow of young wine from coarse lees also stabilizes the content of lighter sulfur aromas.

How to Promote the Stability of Wine to Tartrates

White wine, aged for several months on coarse lees, often acquires stability to tartrates and no longer needs to be stabilized by refrigeration. In the wine-growing region of Bordeaux in France, most wines aged on lees are not stable in March after the first winter, but this stability is achieved by June or July, and the wines do not need to be chilled.

Used barrels are valuable for wine maturation, but the risk of contamination also increases, especially with the perishable yeast Brettanomyces / Dekkera.

Regardless of the new or used barrel, if the wine shows reductive odors after the completion of alcoholic fermentation, it is necessary to remove the coarse yeast. But without fine yeast, the aromas will no longer be protected from oxidation.

Free SO2 in the wine should be in the range between 25 and 30 mg / L throughout the care in the barrique. This content is necessary to protect the wine from oxidation. For wines that do not require apple-milk-acid fermentation, such a sulfur level is a guarantee that biological deacidification will not be triggered by itself. The temperature of the wine during the treatment should not exceed 18 ° C. The improvement in the protein stability of wine in a barrel is conditioned by several factors, namely the length of care, the amount of yeast, the barrel’s age, and the frequency of lifting the yeast.

In the case of Bordeaux wines, it is necessary to wait for care on all lees until June to be sufficient for the stability of less than 40 g / hL of bentonite. This spontaneous improvement in protein stability is faster in use than new barriques. It is accelerated by repeatedly lifting the yeast. Weekly lifting of yeast in the period from November to June in new barriques reduces the need for bentonite by 40%, but if lifting occurs only twice a month and all other conditions remain the same, the need for bentonite is reduced by only 20%. The time of care is very different. If yeast care benefits have already been achieved by the end of spring, we can stream. Sometimes we pour even earlier if there is too much “wood” in the wine, and there is no need to extend the care in the summer because the ability of yeasts to absorb oxygen decreases over time.

Preventing the development of reductive aromas of wines in large tanks is a difficult task. If the first flow was made before unpleasant odors appeared, there is no great risk of H2S occurring.

It is clear that without the presence of oxygen and without raising the yeast, it does not make sense to keep wine on all the yeast. However, a technique allows the wine to be stored on coarse lees in large tanks. A few days after the wine’s sulfurization, which took place one week after completing the alcoholic fermentation, the wine has to be flow. Store the yeast separately in barrels or tanks. The wine remains with fine yeast in a large tank where H2S is less likely. Under these conditions, the existing H2S content in the barricaded lees gradually decreases. After 24 hours, which is surprising, there is no more methantiol in the wine. After about a month, the yeast returns to the wine. In this state, they are no longer able to produce sulfur aromas, but their return to wine causes a significant reduction in methantiol. Similarly, yeast yeasts are able to remove unpleasant mercaptans.

During all stages of care, the content of free SO2 wine in the lees should be maintained, namely between 20 and 25 mg / L. In order to improve the stability of the wine, it should be stored in barriques or tanks in the described conditions until the end of spring.

Checking the Stability of the Wine After the Treatment

Even if wines are grown on lees, protein stability is rarely achieved, and stability to tartrates is sometimes achieved. The final stability of the wines must be checked after the clarification is completed. There is a protein test (at 80 ° C, the wine is tested for 30 minutes, by measuring turbidity before and after cooling the tested wine), which has proven to be the most useful for determining the dose of bentonite (more in Chapter 11 Protein instability of whites and rosé wine). Testing for tartrates is carried out by crystallization (cold test: 6 days at -4 ° C by observing the formation of crystals or by determining potassium).

Today, most wine is marketed in bottles. The buyer demands clear wine, without sediment and with good taste. The “maturation” of young wines, which are bottled for a few months after the end of the alcoholic fermentation, can take only a few weeks, up to a few months in contact with the yeast. Such wines are intended for consumption for one year because they lose their freshness and youthful character. Wines intended for longer maturation, top quality wines gain a lot from the care of fine lees and maintain the quality for many years. During longer care, a large part of unnecessary ingredients is automatically eliminated from the wine, which increases the wine’s stability to protein and tartar. Such slow care is less stressful, so the wines are alive for a long time.